61 Angel Names for Boys and Girls With Meanings 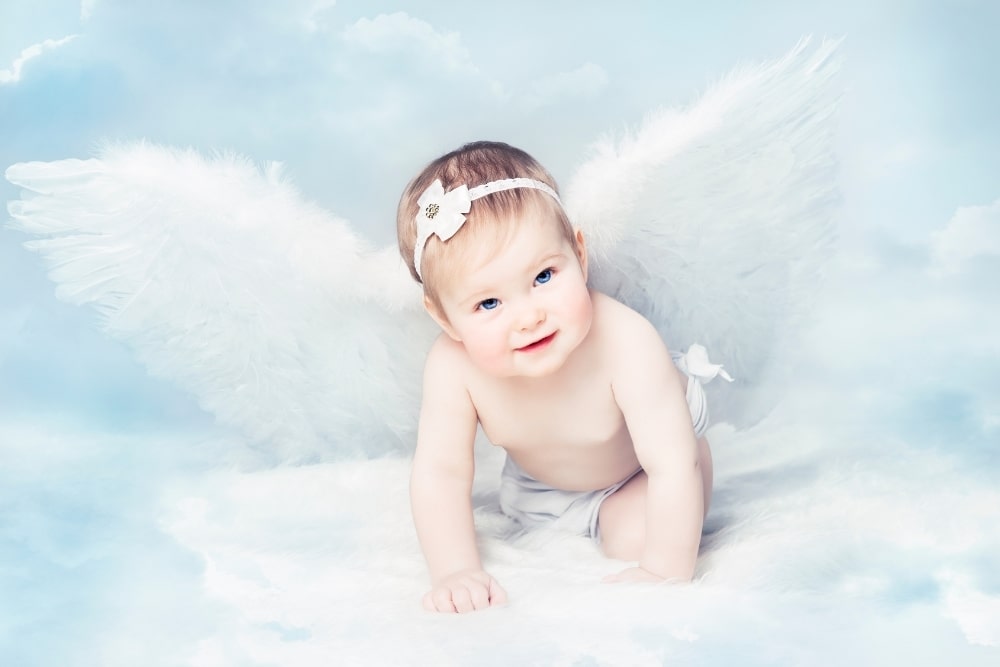 Are you expecting your very own little angel and want their name to reflect this? Many parents look for names that have heavenly and positive meanings.

They believe that this will give their little one the best start in life and hopefully pass on these qualities to them too. And why shouldn’t you?

After all, they’re your perfect little angel on earth. Here are some of our favorite names that mean angel or are simply angelic.

Baby Names That Are Angelic

There is a wealth of names that can fall under this title. However, I feel that we must mention one name that took the baby naming scene by storm a few years ago and that was Nevaeh.

This name spells ‘Heaven’ backward. That particular name is not on our list but see if any of our choices take your fancy.

Alya – A name of Hebrew origin. It means ‘to ascend.’

Anahera – With its origins in Maori, the name means ‘angel.’

Angelique – With its French origins, it literally means ‘angelic.’

Angelica –  This was taken from Italy by the English in the 17th century and was heard widely throughout poetry and plays. It was also in the famous Shakespearean play, ‘Romeo and Juliet.’

Angel – This is a Spanish name used as a term of endearment. It comes from the Greek word ‘Angelos,’ and means ‘messenger or announcer.’

Aniela – The Polish form of the Latin name Angela. It has been in the top 100 names in Poland since the year 1993.

Arcangela – A name of Greek origin. It means ‘high-ranking angel.’

Ariel – This name means ‘lion of God’ as Ariel is an angel of nature. It can also be spelled “Ariael.”

Batya – This means ‘daughter of God.’ It was the name of the Pharaoh’s daughter in the Bible. She found Moses in a basket along the Nile and then brought him home to the court. The name is meant to convey courage and moral strength. 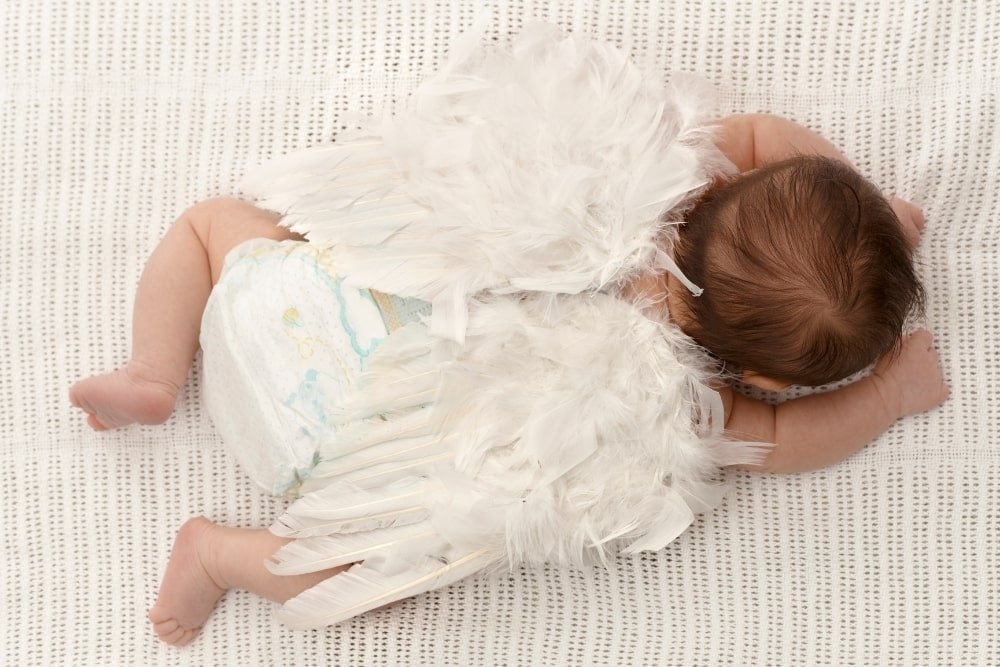 Celine – A name made popular by a French-Canadian singer. It means ‘heavenly.’

Charmeine – This is a variation of the name Charmaine and belongs to the angel of harmony. The meaning of Charmaine is ‘singer.’

Cielo – This name is associated with ‘sky’ and ‘heaven’ in both Spanish and Italian.

Dalili – This Swahili name means ‘a sign from the Gods.’

Eden – The name of paradise gives this baby name a heavenly feel, which comes from a word that means ‘delight.’

Eternity – This pretty name is along the lines of Serenity and Felicity. But it is far more unusual than both of them.

Erelah – This is a Hebrew name, meaning ‘angel.’

Evangeline – With Greek origins, it is said to mean ‘good angel’ and ‘bringer of good news.’

Gabrielle – The feminine form of Gabriel, a prominent angel in the Bible.

Gotzone – This is a truly unique name and means ‘angel.’

Halo – This is a saintly name but does have two very different associations. One with the gaming phenomenon of the same name and the traditional association with the angelic.

Laila – She is the angel of conception who protects and oversees childbirth. This is one of the top 30 names in Australia and the United Kingdom.

Mariangela – This is the combination of Maria and Angel and means ‘rebel angel.’

Melek – This name has Turkish origins and means ‘angel.’ This is a royal name that was well used in ancient times in Turkey.

Micheangela – This is the feminine version of Michelangelo.

Parisa – This is a Persian/Iranian name that means ‘like an angel.’

Rabia – It is the name of one of the ten angels who accompany the sun on its daily course. This name is hugely popular in Arabic and means ‘spring.’

Rosangel – This is an Italian name composed of ‘rosa’ which means rose and ‘angela’ which means angel. The name, therefore, means ‘rose-angel.’

Seraphina – This name is derived from the word ‘seraph.’ These were angels known as the ‘fiery ones.’ Seraphina means a fiery-winged angel.

Tien – A Vietnamese name meaning ‘angel.’ It is the 56th most popular name in Vietnam.

Vanina – With its origins in Spanish and Portuguese, it means ‘bringer of good news.’

Abaddon – The anglicized form of the Greek name Apollyon which means ‘destroyer.’ In the New Testament, it is the name of the angel-prince if the infernal regions and the minister of death.

Amael – This is the name of an archangel that governs virtues and the month of December. It may also relate to the Arabic Amal, which means hope or inspiration.

Angelo – With its Italian origins, it means ‘messenger.’ It returned to recent popularity after singer Adele named her son Angelo.

Cael – This is the name of the angel of the zodiac sign Cancer. He was also a warrior in Irish Mythology.

Castiel – This name grew in popularity from the television series ‘Supernatural’ as the angel hero character. With it’s Hebrew origins it means ‘my cover is God.’

Cassiel – Of Latin origin and means ‘angel of Saturday.’ It is also the name of the archangel who protects those born under the sign of Capricorn. 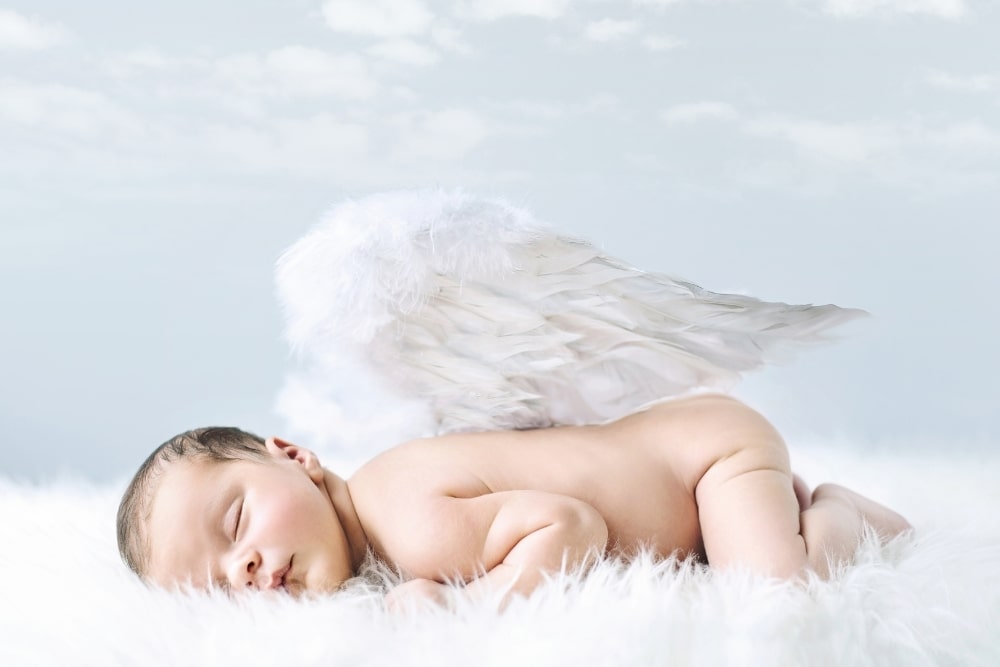 Engel – This is the German variation fo the name Angel.

Gabriel – This is a well-known angel related name. It means ‘devoted to God.’

Haniel – This is the anglicized form of the Hebrew name ‘Chammuw’e’ and means ‘favored by God’. In Jewish lore, it is the name of the angel associated with the planet Venus.

Hariel – He is the archangel who rules over December, Capricorn, and the dawn. He is also the ruler of science and arts and the angel of tame animals. We believe Hariel is an unusual alternative to Harry.

Ingram – A name of German origin and means ‘angel-raven.’

Javan – In the Bible, he is the son of Noah. He is believed to be the ancestor of the Greek people and the guardian angel of Greece. It is a Hebrew name and means ‘Greece.’

Kafziel – This is a Hebrew name meaning ‘speedy one of God.’ He is called the angel of tears and solitude and presides over the deaths of kings.

Kemuel – This is the name of the seraphim chief who stands at the window of heaven. In Hebrew, the name means ‘helper of God.’

Malach – From it’s Hebrew origins Malach means ‘angel.’ This name is very similar to ‘Malachi,’ who was a messenger in the Old Testament with the name meaning ‘my messenger’ or ‘my angel.’

Michael – In the Bible, he is the archangel who led the other angels in a war against Satan. The name means ‘who is like God.’

Michelangelo – Both parts of this name mean angel in their own origins. Michael was an archangel whose name means ‘one who is like God’. The Italian name Angelo literally means ‘angel.’

Nathaniel – Of Hebrew origin and means ‘gift of God.’ The name is featured several times in the Old and New Testaments. 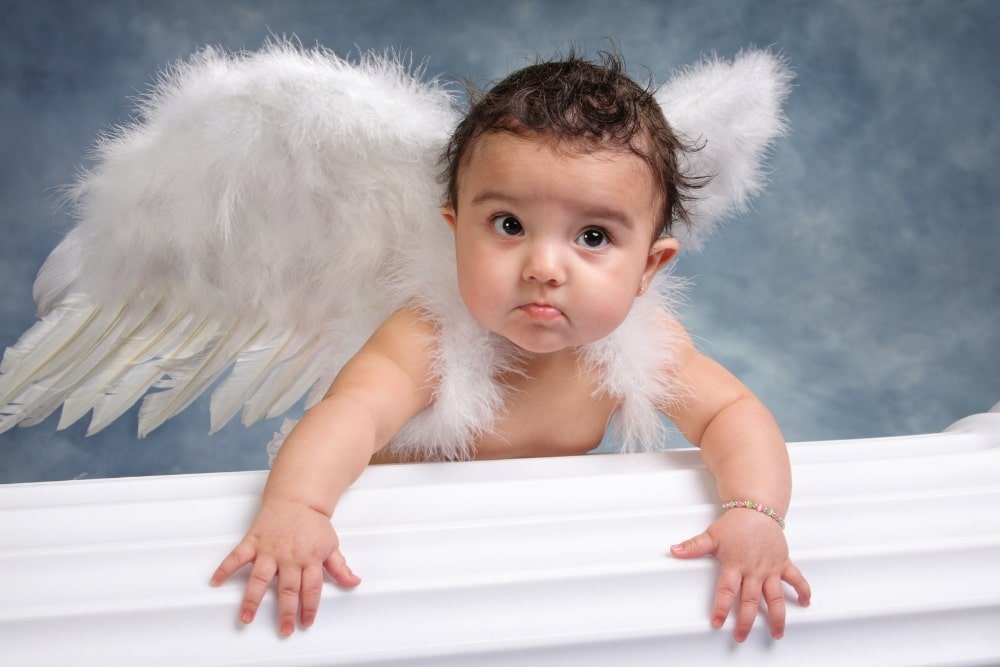 Orifiel – An Old Testament archangel that means ‘my neck is God.’

Raguel – The Latin form of the Hebrew name ‘Reuwal’ and belongs to one of the seven angels in the Book of Enoch. He is known as the angel of harmony, fairness, and justice. The meaning is ‘friend of God.’

Ramiel – This is an Arabic name and means ‘thunder of God.’ He is one of the seven angels mentioned in the Book of Enoch. He is the Angel of hope, and has two important duties – guiding the would of the faithful to heaven and divine visions.

Raziel – According to Judaism, he is an archangel who guards secrets. So the meaning of the name is ‘the angel of mysteries.’

Raphael – He is one of the seven archangels who attended God’s throne. He is the angel of healing and also the patron of science, doctors, travelers, and healing.

Samuel – He is one of the prophets in Jewish mythology. He established the Hebrew monarchy by anointing both David and Saul as kings.

Uriel – This is the anglicized form of the Hebrew name Uwriyel, which means ‘flame of God’ or ‘the light of the Lord’. It is the name of one of the seven archangels names that were removed from the recognized list of angels in 145 AD, and we have no idea why.

Yael – This is the name of the cherub who attends the throne of God. It means ‘to ascend.’

Zadkiel – This was the name of the archangel of benevolence, mercy, and freedom. He is said to be the angel who held Abraham’s hand to prevent him from sacrificing his son. In Hebrew, the name means ‘righteousness of God.’

Zerachiel – According to Jewish literature, he is an archangel who is said to be an angel of healing and mercy.

No matter whether you choose a name that means angel, angelic, or any other such meaning, your little one will always be seen that way by you.

Choose a name that you love and you feel will stand the test of time. Remember your baby girl or boy is stuck with this name for the rest of their life. Pick wisely!

Hi, I'm Emma and I'm a mother to 5 beautiful children aged from 1 to 21 years old- life is hectic! I have learned so much along the way, not only from my own children but also through my professional life. In my positions as a Childminder and Teaching Assistant, I have studied Child Development and The Early Years Developing Practice. I wish to share all of this knowledge and help you with your own parenting journey!
PrevPreviousWhen Should a Child Be Able to Spell Their Name?
Next10 Best Dish Soaps for Baby BottlesNext