Do Babies Have Eyebrows? When Do They Grow? 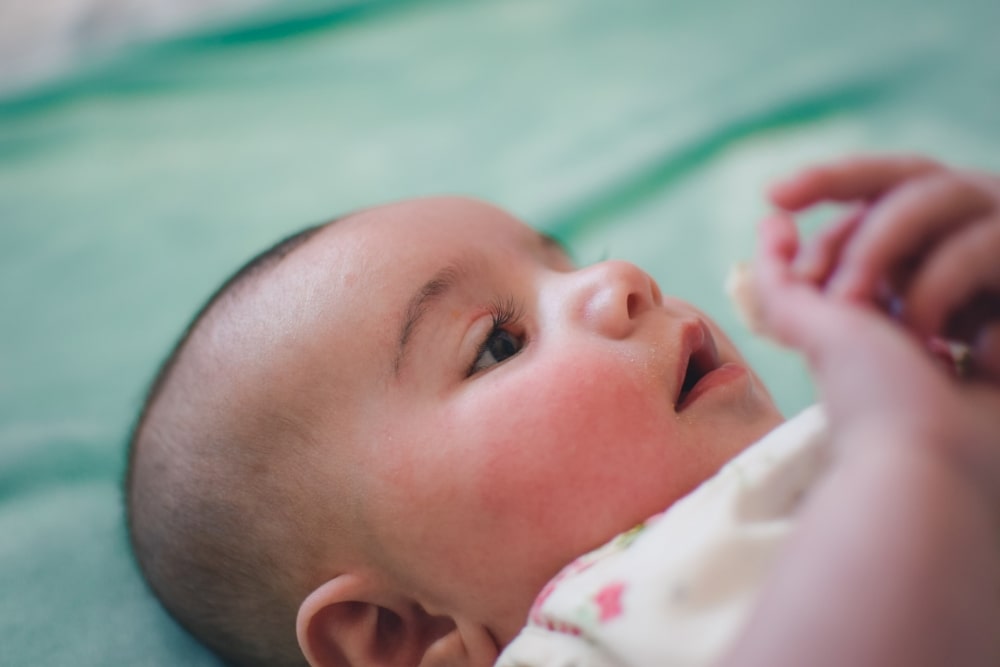 When my grandson was born, he had no eyebrows. I thought maybe there were fine hairs that I couldn’t see, or perhaps it’s because he was born so early.

Then I thought back to my own children and realized they were also born with no or sparse eyebrows. It led to a quest to find out do babies have eyebrows? The answer is not a simple yes or no.

If you are wondering when your little one will finally have eyebrows, this article will tell you everything that you need to know.

Babies Get Them In The Womb

Some babies develop eyebrows in the womb! Your little one could be born with his or her eyebrows already in place. The color may change, and they may become fuller as time goes on.

Babies who do not seem to have eyebrows might have a few little pieces of hair in the place that their eyebrows will grow. This just means that it will take them some time to grow in. 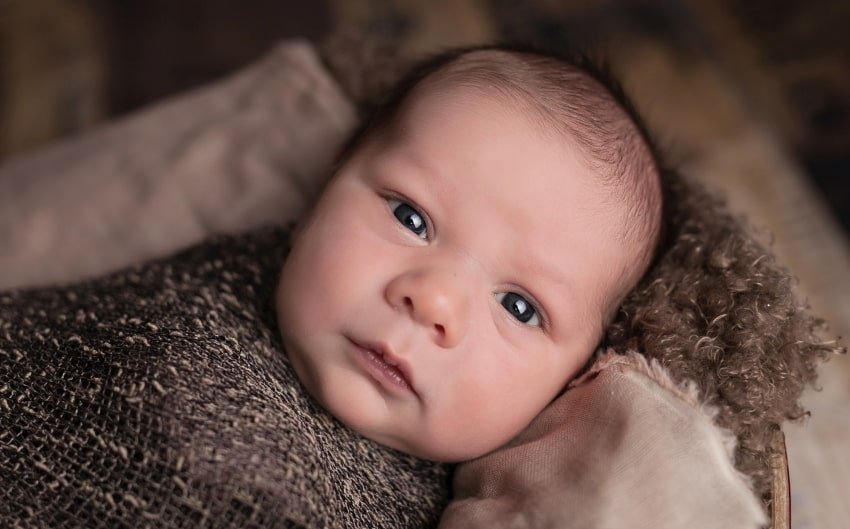 Some babies are born with either extremely sparse eyebrows or almost no eyebrows. This does not mean they are cursed to live without eyebrows, though!

Hopefully Within A Few Months

Once your baby reaches the one month mark and you still don’t see eyebrows, it can be concerning for first-time parents.

Instead of stressing about do babies have eyebrows and wondering when they will come in, you can trust that your little one will develop eyebrows within the first few months.

As the hair continues to grow, you will see his or her eyebrows begin to take shape. This may take longer for some babies, though.

Waiting For A Year Is Normal, Too!

Some babies do not develop prominent eyebrows during their first year. This is also in the normal range. This hair might take longer to grow in some babies than it does in other ones.

My son barely had eyebrows on his first birthday. My daughter had them by the time she was two months old. In this situation, it’s important to remember that both ends of the spectrum are normal, and your little one will grow eyebrows eventually. 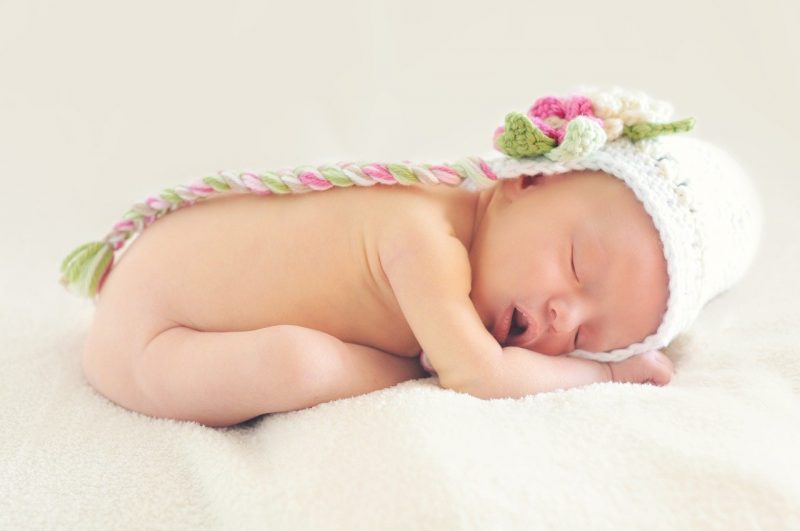 Premature babies take longer when it comes to everything, such as eating baby food. This also includes hair growth. If your baby was born a month early, expect for them to be at least a month behind on hair growth.

Some premature babies are born with no eyelashes or eyebrows, especially those born before the 35-week mark. Instead of estimating where they’re at, based on the day they were born, start with their due date.

It can be calming to know that your little one is only supposed to be a few weeks old, which would make them not having eyebrows expected.

Eyebrows Can Be Hard To Spot

Your baby could already have eyebrows, but you may be missing them! Blonde eyebrows often do not show up in pictures.

You may have to hold your little one up to the light to determine if their eyebrows are made of pale blonde hair. This is extremely common in babies and maybe a sign that your little one will be blonde.

Sparse eyebrows could also be the case. A person’s eyebrows are often determined by their genetics, so you may want to take a good look at your eyebrows and your partner’s as well.

If you notice that you’re filling in your eyebrows, and your partner has sparse eyebrows that you wish he would fill in, there is a good chance that your baby’s eyebrows have grown all they are going to.

Have patience and they may fill out in time. On the other hand, it might be time to accept that your little one will also have thinner eyebrows.

Because eyebrows start out as peach fuzz, they can be easily missed. Even if your little one is going to be blessed with dark, perfectly shaped eyebrows, they might start out as barely-there peach fuzz.

Use the flashlight on your phone or the light shining in from a window to determine whether your little one has the start of eyebrows.

There are a lot of products on the market that boast that they can instantly make eyebrows grow. It can sound appealing to simply spread a product on your little one’s eyebrows for them to magically appear, but this is not a good idea. 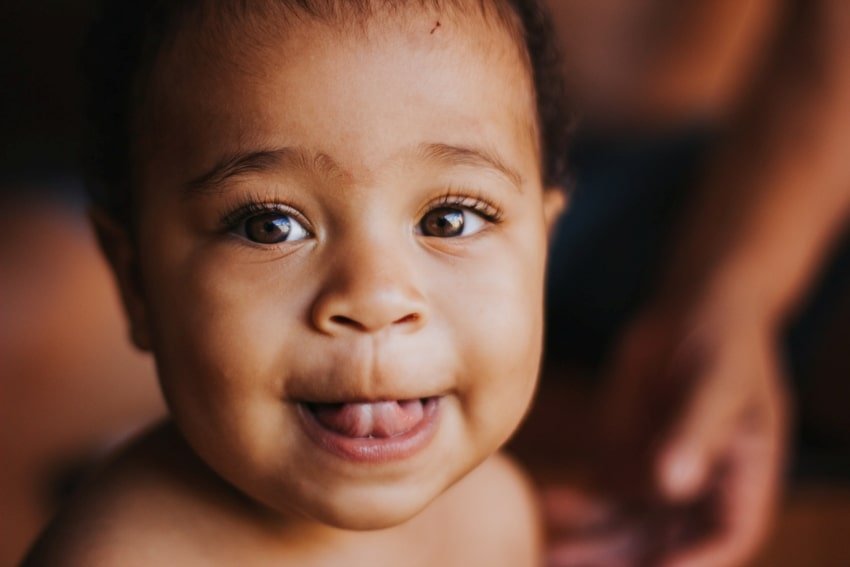 These products are loaded with chemicals that can be dangerous for babies. Attempting to put them on your little one’s eyebrows can result in accidentally getting them in their eyes, or having toxic chemicals being absorbed into the skin.

Even if you do not get the eyebrow growth treatment in their eyes, your baby might. Little ones cannot control their movements the way that we can.

This makes it extremely likely that they may move their hand along their eyebrow area, coming in direct contact with the product. Then, they may put their hand in their eye or their mouth, resulting in harmful side effects.

This also applies to organic products, such as coconut oil. This is a common home remedy to make hair grow, but it is also not safe to be in the eye.

If it is not safe for your little one to have in their eye or mouth, it should be completely avoided to guarantee that your little one does not accidentally wind up in the emergency room.

Every baby that does not have a medical condition that prohibits hair growth will have eyebrows eventually. It can seem odd to have a baby with dark hair and no eyebrows, but it’s important to have patience.

Remember that every baby grows in their own time, and so do their eyebrows.

My name is Amber Dixon. I am a mother to three wonderful children, and recently welcomed a beautiful grandson into the world as well as into my home. I've learned a great deal about raising children through my own experiences as a mother, but also from several other places. While working at a daycare full time, I learned about childhood development, teaching children, and more. Through earning degrees in Social Work, I was educated about human development, including a great deal about children and childhood development. My education and experience combined have taught me a lot about children of every stage and age, and I hope that I can help you on your journey to becoming the best parent that you can be!
PrevPrevious20+ Cute Gender Neutral Pet Names For Your Partner
NextI Don’t Want to Be Pregnant AnymoreNext