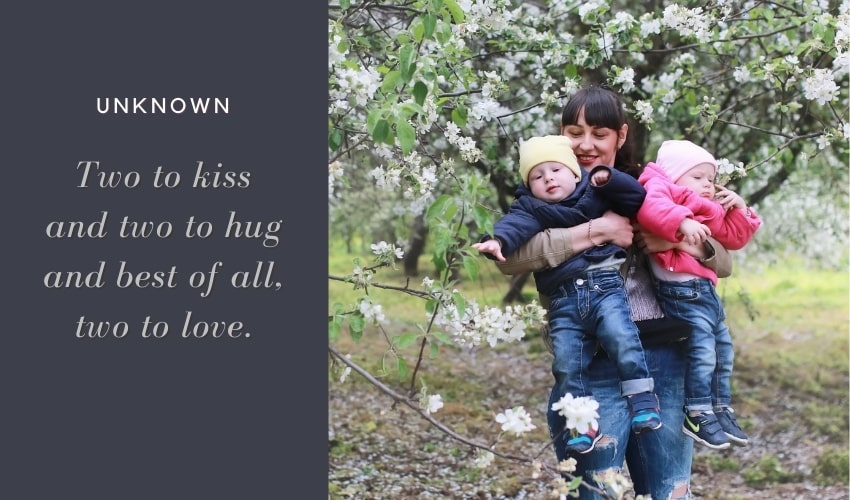 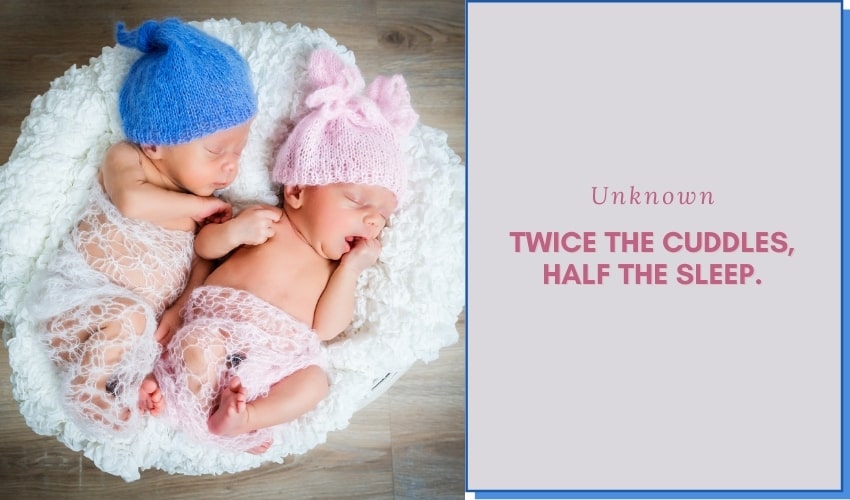 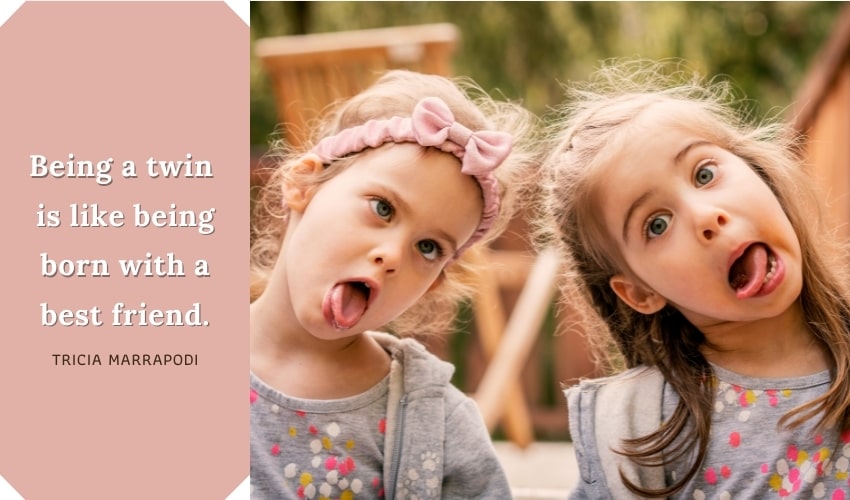 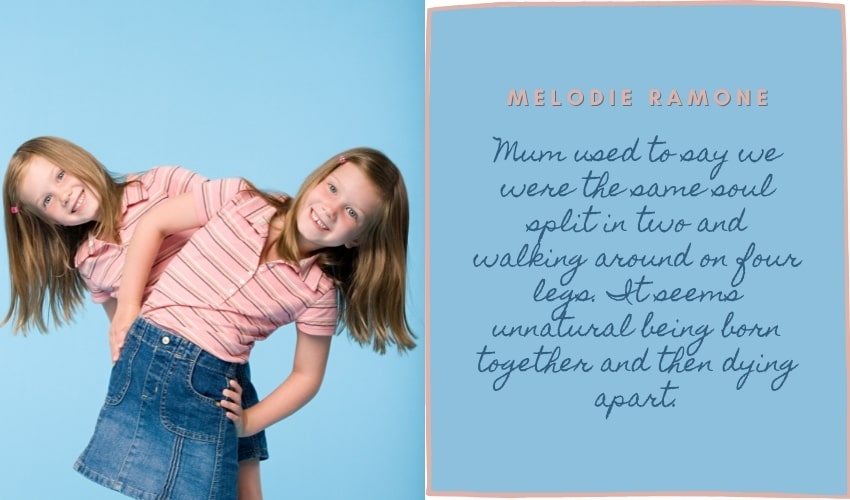 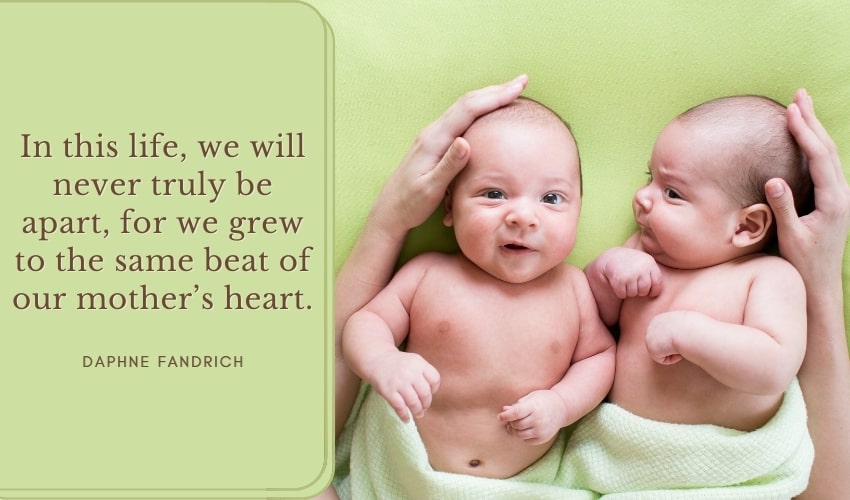 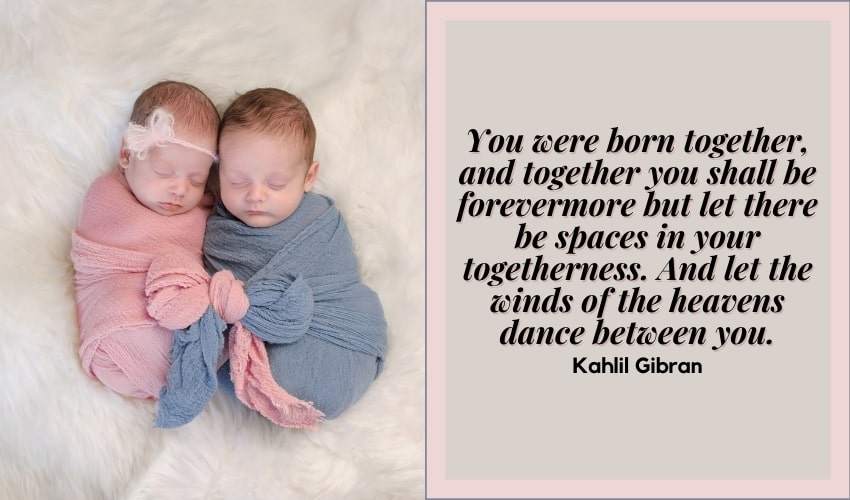 Having twins or taking care of twins is twice the fun! It’s also twice the diaper changes and feedings, twice the hugs, and twice the love! There is simply nothing that can compare to the joy of raising two little bundles of joy.

These quotes are going to bring a smile to your face on bad days, let you know that you’re not alone, and give you something adorable to say on those good days. It doesn’t matter whether you need a quote for yourself or a caption for an Instagram picture, these are perfect!

Some of these quotes are beautiful, others are heartwarming. If you’re looking for the perfect twin quote, these are sure to make you smile.

They comment on the special bond that only twins can share, and help to remind you how truly blessed you are to have a beautiful set of twins in your world. There are funny twin quotes, adorable twin quotes, and more!

1. You were born together, and together you shall be forevermore but let there be spaces in your togetherness. And let the winds of the heavens dance between you. – Kahlil Gibran

2. As siblings, we were inextricably bound, even though our connections were loose and frayed…. And each time we met, we discovered to our surprise and dismay how quickly the intensity of childhood feelings reappeared…. No matter how old we got or how oft. – Jane Mersky Leder

3. A twin knows exactly when the other one is spitting up, but that’s all they know about anything. – Mary-Kate Olsen

4. I’ve always been fascinated by twins. In my forty years of photographing, whenever there was an opportunity, I would take a picture of twins. I found the notion that two people could appear to look exactly alike very compelling. – Mary Ellen Mark

5. My sister and I, you will recollect, were twins, and you know how subtle are the links which bind two souls which are so closely allied. – Arthur Doyle

6. When you gaze upon the lovely sight. Of twins, arm in arm, asleep at night. Think not that the house has been doubly messed. But that you, as parents, have been doubly blessed. – Jon Bratton

7. It’s a twin type of telepathy. My sister and I, we share the same DNA, so on paper, we’re the same person. I knew she was pregnant, like, right away – it’s so crazy – but I asked her, and she said yes. – Tia Mowry

8. In the world we live in, what we know and what we don’t know are like Siamese twins, inseparable, existing in a state of confusion. – Haruki Murakami

9. If you are a twin, you watch yourself live two lives–yours and hers. It’s a constant comparison. I am never as good as the bad I wanted her to be. I was the only soldier I needed. We couldn’t have known what splitting would mean. Time speeds past fast, scattering like shrapnel, and is quiet as cobwebs. We wait for the ambush. Sister will find out first; she’ll be my living memory. She will be the body left standing. ― Christa Parravani

10. In this life, we will never truly be apart, for we grew to the same beat of our mother’s heart. – Daphne Fandrich

11. When you gaze upon the lovely sight. Of twins, arm in arm, asleep at night. Think not that the house has been doubly messed. But that you, as parents, have been doubly blessed. – Jon Bratton

12. A lot of people say, ‘Wow, you’re a single father of twin boys, that’s crazy!’ Two toddlers can get hectic, but I wouldn’t change it for anything. Every day they teach me different things. The love is there. When you have a two-year-old saying every other hour, ‘Papi, te amo. Papi, I love you,’ it can’t get better. – Ricky Martin

13. In the beginning, we didn’t have a clue. There’s certainly nothing that prepares you for twins. – Christine Mazier

14. The special relationship between twins is that, if there’s anyone else in the world that’s going to get or be the confidant that you need, it’s an identical twin. – Sam Underwood

15. There is a special bond between twin soul mates – unconditional love, respect for each other, bringing out the best in each other, and highly compatible. – Julien Offray de La Mettrie

16. I guess because twins have this mystique, and triplets – I think the normal sibling connection potentially can be very powerful, and there’s this idea that it’s even more powerful. It really is, not just someone like me, but another version of me. – Curtis Sittenfeld

18. Things every person should have: • A nemesis. • An evil twin. • A secret headquarters. • An escape hatch. • A partner in crime. • A secret identity. – Wil Wheaton

20. Mum used to say we were the same soul split in two and walking around on four legs. It seems unnatural being born together and then dying apart. – Melodie Ramone

21. Identical twins. I’m glad they’re identical ’cause you save money on photographs. That’s what I like. Yeah. Here’s my little boy. I got another one just like it. – Ray Romano

23. Life is so much better when you have a twin to share the ride. – Unknown

24. Without identical twins, you’ll never get to experience entering a hotel room with one of them and watching him run into the full-length mirror because he thought he saw his brother. – Ray Romano

25. So many good things come in pairs, like ears, socks and panda bears. But, best of all are the set of twins, with extra laughter, double grins. – Unknown

26. Our instructors do not understand how it is. To be bound to someone in such a way. They are too old, too out of touch with their emotions. They no longer remember what it is to live and breathe within the world. They think it simple to pit any two people against each other. It is never simple. The other person becomes how you define your life, how you define yourself. They become as necessary as breathing. Then they expect the victor to continue on without that. It would be like pulling the Murray twins apart and expecting them to be the same. They would be whole but not complete. – Erin Morgenstern

27. A sister is a special type of angel on Earth who brings out your best qualities. – Unknown

29. Because I have a twin brother, I’ll always have a friend. – Unknown

30. Being a twin is like being born with a best friend. – Tricia Marrapodi

31. So we grew together, Like to a double cherry, seeming parted, But yet a union in partition, Two lovely berries molded in one stem. – William Shakespeare

32. That awkward moment when you see twins fighting and one of them calls the other ugly. – Unknown

34. When twins are separated, their spirits steal away to find the other. – Jandy Nelson

36. True twins share womb chemistry and endure many fateful slings and arrows together. The fabled connection between twins is true in my case. – Gregory Benford

38. At times like this, Eryn didn’t feel like they were just twins. They were teammates. They were partners. They were two halves of the same brain. – Margaret Peterson Haddix

39. Even identical twins have their own differences. – Mokokoma Mokhonoana

40. Twice the cuddles, half the sleep. – Unknown

41. Twins have a special bond. They feel safer with each other than with their peers. – Jeanne Phillips

42. After raising twins, you get organized. – Scott Ellis

43. They’re twins? Really? They look so . . . different.’ Okay, this one I get all the time because my twins are very different in height and weight so, fine, maybe I’m being oversensitive here, but how do you expect a person to respond? ‘Oh, shit. You know what? I may have walked out of the hospital with an extra baby! Not again!’ If you don’t want a sarcastic response, just take our word for it and don’t mention it. – Stefanie Wilder-Taylor

44. It is not economical to go to bed early to save the candles if the result is twins. – Chinese Proverb

45. Parents of twins, triplets, and anything higher than three kids at once are amazing people who have been blessed not just with multiple children but a massive chunk of patience. – Chris Illuminati

46. If you’ve got twins, you’re on the frontline. You know those mornings when you’re grumpy because your baby was up half the night? Well, twin dads were up half the night with one kid and then the other half with the other. – Nick Harper

47. My twin, Go. I’ve said this phrase so many times, it has become a reassuring mantra instead of actual words: Mytwingo. We were born in the ’70s, back when twins were rare, a bit magical: cousins of the unicorn, siblings of the elves. We even have a dash of twin telepathy. Go is truly the one person in the entire world I am totally myself with. I don’t feel the need to explain my actions to her. I don’t clarify, I don’t doubt, I don’t worry. I don’t tell her everything, not anymore, but I tell her more than anyone else, by far. I tell her as much as I can. We spent nine months back to back, covering each other. It became a lifelong habit. It never mattered to me that she was a girl, strange for a deeply self-conscious kid. What can I say? She was always just cool. – Gillian Flynn

49. Twins are something that everyone wants to have until the realization sets in that two newborn babies at one time are about to happen. – Chris Illuminati

Twins are two people that are born from the same womb, the same beating heart, and the same mother. They are instantly best friends for a lifetime. My sisters are twins.

Raising twins can be both wonderful and challenging. While things can get hectic, you never stop feeling twice the love. Strangers will always make comments about you having twins.

For my sisters, it was always about how they don’t look like each other because they’re fraternal twins. There are also comments about twice as many diapers. You also get twice the chaos.

I really enjoyed these quotes because I feel that they capture every moment of both being a twin and having a twin, from the special bond to the life of parents raising two bundles of joy. 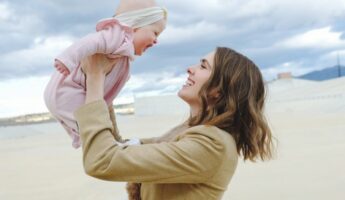 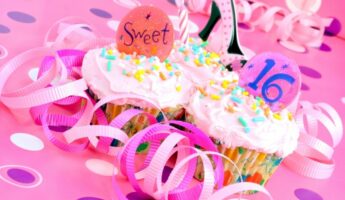 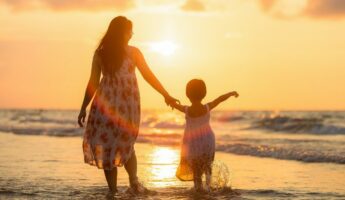 Parenting
What is a Mother? 16 Real-Life Definitions from People of Different Backgrounds 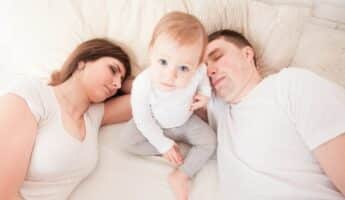 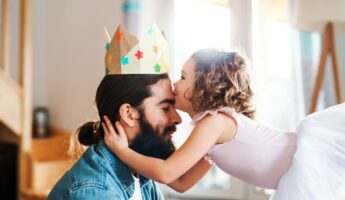 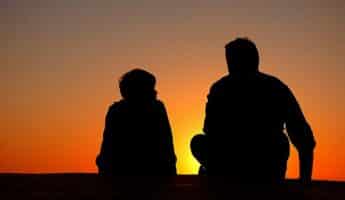 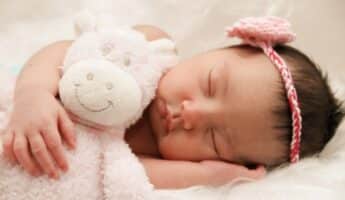 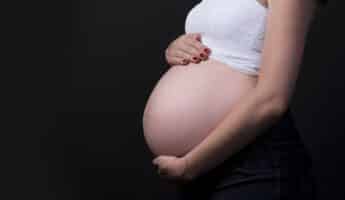