Nintendo is marketed as a family-friendly all-inclusive gaming system that even your 3-year-old can use.

For the most part, this is true but don’t be lulled in the false sense of security that all their games are suitable for an audience under 10 years old because you would be sadly mistaken.

We’re going to take a look at some of the best games that they offer for this under 10 age group. The best games for this age group are mostly rated “E” for everyone.

These E rated games are child-friendly and don’t have any nasty surprises such as violence or inappropriate content for those little eyes.

Nintendo is family-friendly and comes with the multiplayer feature which brings families together to play. In that respect, it is a very social gaming system that is perfect for family nights in.

Here are some of the best E rated games that are available on Nintendo. Some of these you may have heard of and others you may not, just because a game is top-rated it doesn’t mean that your child is going to enjoy playing it may be a little bit trial and error.

Short On Time? Here Are Our Top 4 Choices

Prices and images pulled from the Amazon Product Advertising API on: 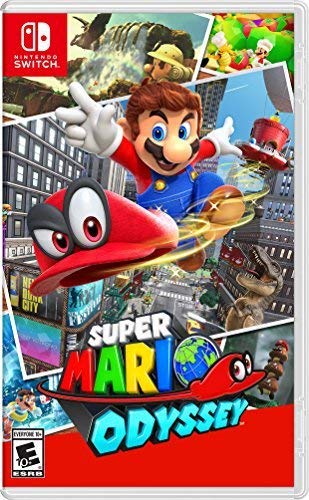 In this quest to save Princess Peach, Mario has a few new moves thanks to his hat which has come alive. Cappy allows Mario to use powers to capture and control objects, animals, and enemies.

It also allows you to collect Power Moons so you can power the Odyssey airship and save Princess Peach. If you want to play with a friend you can give a controller to Player 2 and they get to control Cappy while you as Player 1 control Mario.

Minecraft allows your children to use the full force of their imagination in Creative mode. They can build anything they like using unlimited resources.

If they want further adventure, they can switch to Survival mode and journey across mysterious lands and into the depths of their own never-ending worlds.

A great game to share with friends as it has the option for spilt-screen multiplayer and online gaming.

With a good range of fun, action-packed minigames, Carnival offers children a great experience second only to actually going to the carnival. Carnival offers various bite-sized competitions all carnival themed.

You can earn tickets which you can then use to unlock other games. It has several different themed areas within each there are different games such as skeeball, clown knock-down, and shooting hoops.

This is a great game to play as a family as it offers a number of multi-player options. The games are easy for even the youngest members of the household to play with some assistance. 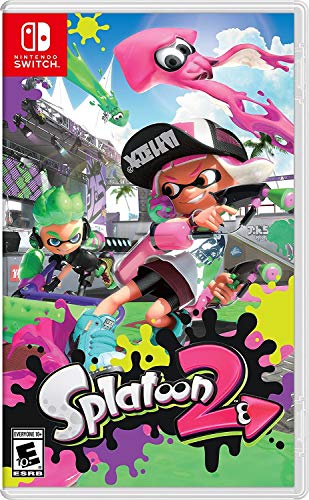 It’s been two years since the original Splatoon was released and this game offers fresh fashion and upgraded kit.

This is essentially a third-person shooting game but it’s super easy to get into and allows young children to wreak havoc by shooting colored ink all over the screen without having to actually aim for a set target.

It does then offer the older player the ability to push ahead, hones their skills, and take down the enemy team. 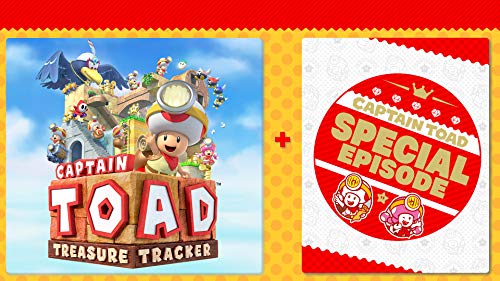 Captain Toad is one of the famous Mario characters who has been upgraded to his very own game. Solve puzzles, collect treasure, and dodge dangers as you navigate across many different courses.

Try the multiplayer to help your child work their way across the trap riddled courses and collect items along the way. 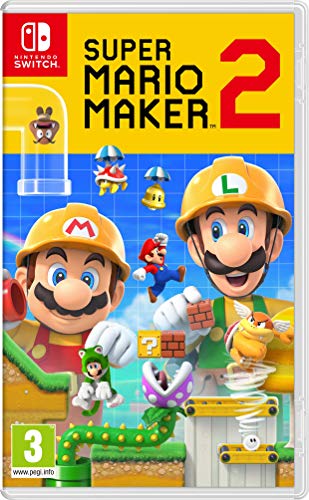 This game allows your child to use their creativity to build their own stages and show them off on the internet. It’s also possible for them to download other users’ content and use that too.

The level designer is relatively simple to get the hang of and comes with clear instructions to help you along.

If your little one is not keen on the creation side of this game, do not be dismayed. There is plenty of premade Mario content that they can play with tons of stages already made by developers. 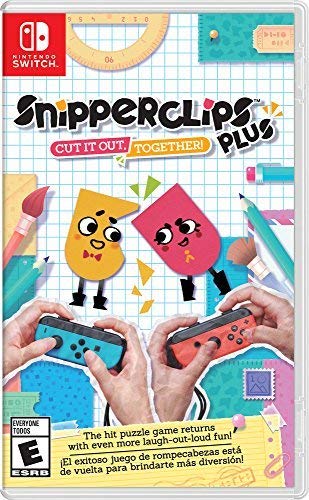 This is a unique puzzler that requires your child to use their brainpower to problem solve and communicate. It is simple even for the younger players in your home and they rarely become overwhelmed or find the tasks too complicated to complete.

You may be asked to perform basic tasks like bouncing a basketball off your head into a hoop or carving a simple shape that enables liquid to be transferred from one place to the next.

It’s a great way to play with your kids and for them to learn at the same time. 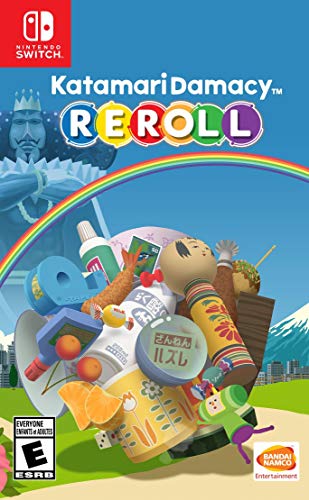 This is an action-puzzle game that does resemble Splatoon 2 in that it has a manic runaround theme. But unlike Splatoon, it takes the approach of clearing up the mess rather than creating it.

It has a great soundtrack that’ll really appeal to young children. The gameplay is also super easy for them to get to grips with. The basic idea is to roll around a mass of random objects that are lying around.

It can be used in multiplayer mode by using two Joy-cons.

9. Yooka-Laylee And The Impossible Lair 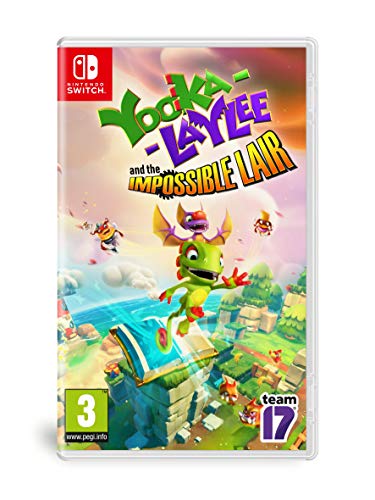 This is a relatively new franchise on the Nintendo Switch it still offers great side-scrolling play. It is a delight to play and has enough story and depth to keep young children engaged without a much-complicated back story.

Yooka and Laylee must face a challenging series of levels to take down capital B. A great game to play with your children offering multiplayer options too. 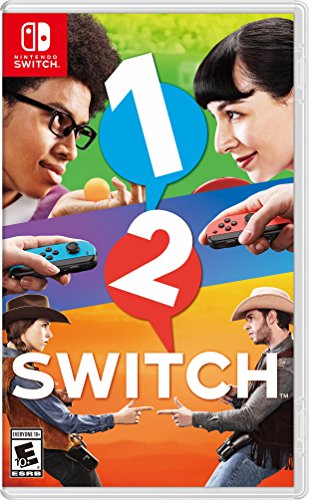 This game has been designed for families who didn’t want the typical multiplayer shoot them up and capture games. It offers families a good laugh as they play together and concentrate on those taking part instead of the screen.

The players look at each other and not at the screen as they face off in wild-west duels, cow-milking competitions, or a copy-cat dance-off. This game is full of hilarious action and is fantastic for those little ones with bags of energy.

This is a classic Nintendo game that offers great multiplayer gaming for the whole family. Your children will love racing you to the finish line as they navigate colorful tracks filled with objects to collect and use as you go.

This can be used as a 4 player multiplayer which offers greater flexibility to get the whole family involved. 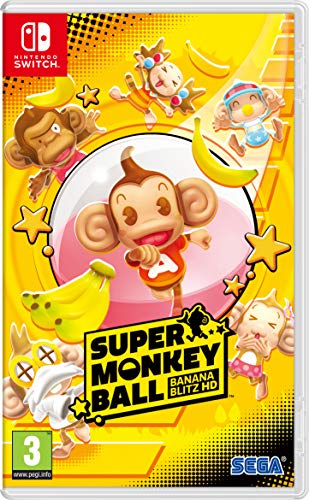 This is a concept that you may recognize from Sega. It revolves around a monkey coasting along in a plastic ball collecting bananas as he goes. It offers simple gameplay that can be played by your children while having fun and not being too in-depth.

It also offers a similar option to the Mario Party games providing 10 short games such as WAxk-a-Mole, snowboarding, and a target-landing game that is loads of fun. 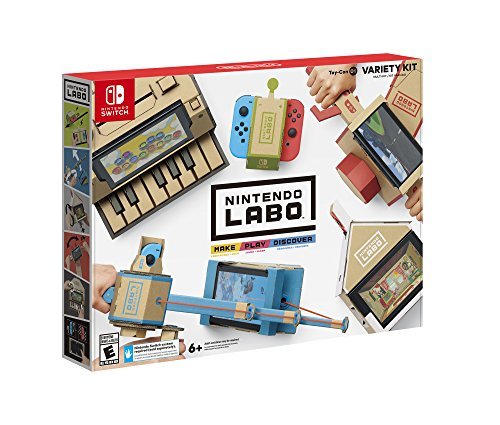 This received some confused looks when Nintendo announced their latest release of minigames using cardboard cutouts. But this is a great design from Nintendo offering a hybrid toy-video game which is super easy for kids to get into.

This is the variety kit that includes a collection of cardboard Switch accessories that allows your child to feel more part of the game than a traditional game. It includes a fishing rod and a keyboard.

Assembly can be tricky for little ones so there will be an element of parental assistance and guidance required.

How The Rating System Works

A game’s rating is given a letter and it is based on what the Entertainment Software Rating Board feels that the content reflects.

Here are the rating letters which will give you more idea of what you are purchasing and whether it is suitable for your children or family gaming night.

As the name suggests, this rating means that the game is suitable for all ages. It also means that you can have peace of mind that there will be no unexpected bad language or inappropriate content.

This is not a reflection on the content of the game but more to do with the story and gameplay. It may be that both of these have gone up a difficulty level and those under this age may find it too challenging.

This rating lets you know that this game is only suitable for those 13 and above. These games may contain violence, suggestive content, or crude language.

This rating allows you to make the assumption that these games are only suitable for those 17 and above. Games that carry this rating have scenes of violence or gore, strong language, strong sexual themes, and partial nudity.

So that’s how the rating system works. It gives you the confidence to purchase games knowing that they are suitable for the age group that you intend them for and that there will be no nasty surprises.

How long should I allow my child to play video games?

This is a question that parents have been asking for many years and they have received conflicting advice. An hour a day is totally fine and this has been backed by a study from Oxford University.

But children should not be allowed to play for excessive hours as this can impact their social skills over time.

Are video games addictive for children?

You need to set firm rules about the length of time and what kinds of games your children are playing. As with any other activity, if allowed to play unchecked, video games can quickly become addictive and cause problems at home.

The recommended length of play per day is 1 hour.

Video games have been around for a long time and they have always seemed to attract bad press. Personally, I think that if they’re carefully monitored for individual play or used for family time, they are great assets to any household.

The games offer an escape to a new world of mystery and adventure. Many of the games now offer the added ability to help your children learn as they play which is a fantastic feature.

These are some of the best Nintendo Switch games available for the under 10 age group that offer a variety of play and learning which I think is the perfect combination.

Hi, I'm Emma and I'm a mother to 5 beautiful children aged from 1 to 21 years old- life is hectic! I have learned so much along the way, not only from my own children but also through my professional life. In my positions as a Childminder and Teaching Assistant, I have studied Child Development and The Early Years Developing Practice. I wish to share all of this knowledge and help you with your own parenting journey!
PrevPrevious101 Two Syllable Girl Names
NextHow To Get Free Car Seats, Baby Food, and Diapers For InfantsNext