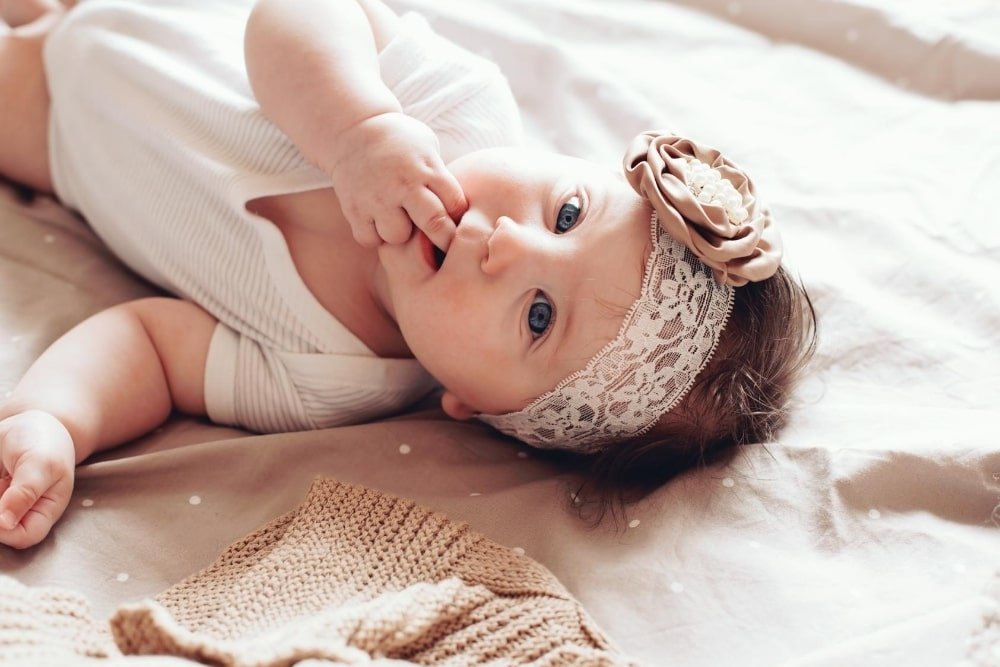 Choosing your baby’s name comes with such huge expectations. It also brings the feeling that if you get this wrong, your child will be doomed to a life of sad and pitiful existence!

I know it’s very dramatic, isn’t it? But the truth is choosing a name for your child can be so difficult and can be a minefield when it comes to family tradition and expectation.

But if you’re looking for some beautiful baby girl names then we have a great selection. Here are 101 two-syllable names for baby girls. Hopefully, this list will give you a few new ideas, and if not at least it is a good read!

Here is a list of beautiful baby girl names that have two syllables. Some of them you may know others may be new to you.

Alice – The name is of German origin meaning ‘noble’. It became increasingly popular once it appeared in Lewis Carroll’s Alice in Wonderland.

Anna – A Latin form of the Greek ‘Avva, and the Hebrew name Hannah meaning ‘favor’ or ‘grace’ or ‘beautiful’.

Aubrey – The name is of English origin and means ‘noble ruler’. It tends to be a name considered by parents looking for a gender-neutral baby name.

Autumn – Derived from the Latin word autumnus meaning ‘fall’ or ‘autumn’. It has been used in the USA since the late 1960s and has been ranked among the top 100 girls’ names for the past 10 years.

Ava – It dates back to medieval times and has Germanic origins. It has both Latin and Hebrew roots although its meaning is unknown. 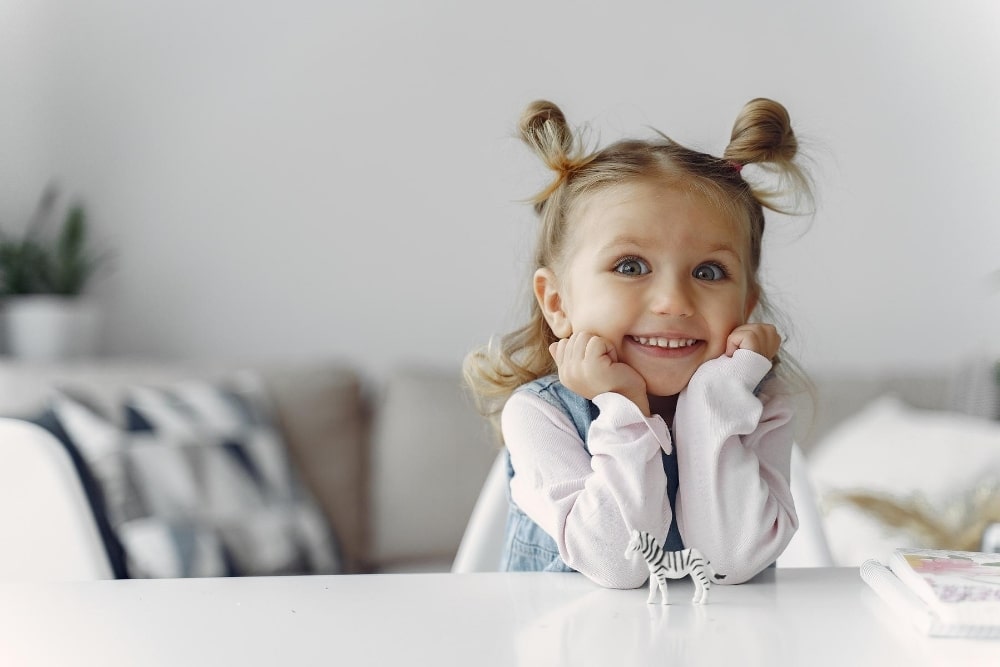 Bella – A diminutive form of names ending in -bella and had origins in Italian, Spanish, Greek,  Portuguese and Latin words for beautiful.

Betsy – Comes from the Hebrew name Elisheba which means ‘oath of God’.

Bailey – It’s of English origin and the meaning is ‘berry clearing’. Another name that is considered gender-neutral.

Braylee – This is a combination of the names Bray and Lee. It is of English origin.

Bridget – It is a Gaelic/Irish name that is derived from the word ‘brigh’ which means ‘power, strength, vigor, virtue’.

Charlotte – This is a female version of the make name Charlot which is a diminutive of Charles. It has its origins in France and means ‘free man’ or ‘petite’.

Chloe – This means ‘blooming’ or in Greek, it means ‘fertility’.

Clara – It is a feminine name of the Latin name Clarus which means ‘clear, bright, famous’. Clare was the English form that was used in the middle ages, but in the 19th century, the Latin spelling Clara became more popular.

Cora – It is of Greek origin and means ‘heart and maiden’.

Carly  – This name has its roots in Gaelic and means ‘small champion’.

Casey – Derived from the Irish Gaelic meaning ‘vigilant’ or ‘watchful’.

Dana – An alternative spelling for the name Danu who was a Celtic fertility goddess. In Hebrew, the name means ‘arbiter’ or ‘god is my judge.’

Daphne – Its origins are in Greek and means ‘bay tree or laurel tree.’

Delta – The name means ‘mouth of the river’ and is of Greek origin.

Demi – The name has French origins and means ‘half or small.’

Eden – This name has several variations, from the Biblical Garden of Eden which means ‘delight.’

Ella – Its origins are in Greek, Norman, and Hebrew. It means ‘beautiful, fairy maiden and goddess.’

Elsa – With German origins and means ‘consecrated to God or noble.’

Emma – Derived from the Germanic word ermen which means ‘whole’ or ‘universal.’

Farrah – It is derived from a Gaelic surname and means ‘beauty’ or ‘pleasant.’

Frida – It is a short form of the names containing the Germanic element fried which means ‘peace.’

Freya – Its origins are from Old Norse and means ‘lady’. It was the name of the goddess of love, beauty, war, and death in Norse mythology.

Finley – Means ‘fair warrior’ and is of Scottish origin. It is considered a gender-neutral name. 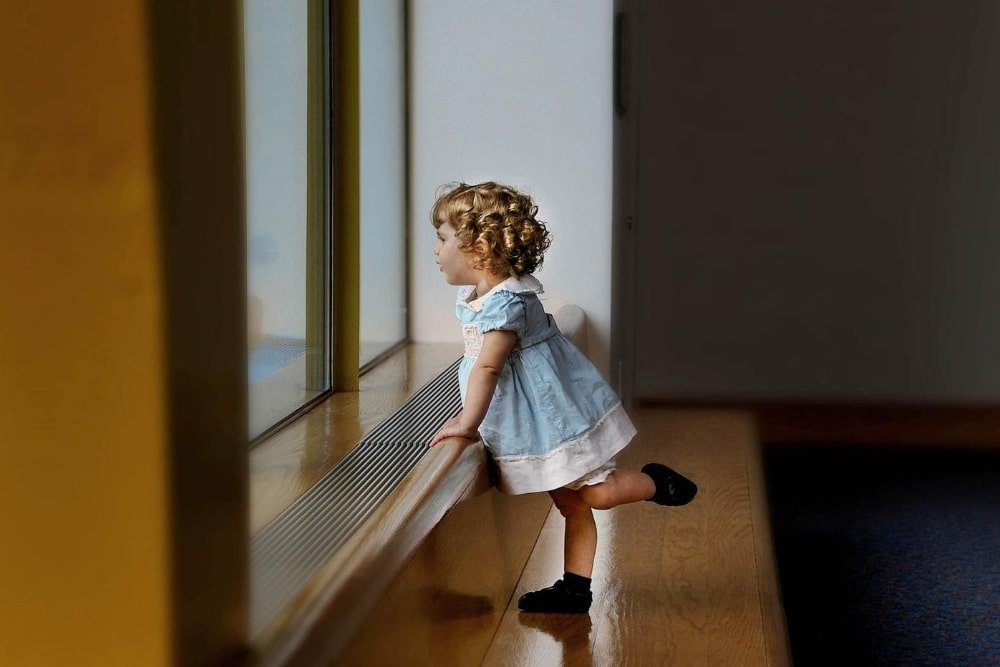 Gilda – A name of Celtic origin meaning ‘servant of God.’

Gladys  – It is derived from the Welsh name Gwladus which means ‘royalty, princess.’

Hailey – This has over 10 different spellings and means ‘dweller in the hay meadow.’

Hannah – It is derived from the root h-n-n meaning ‘favor’ or ‘grace.’

Hazel – It is derived from the Old English haesel and became popular in the late 19th century. It means ‘hazel’ from the name fo the tree of the color.

Ida – This name occurs in several cultures. In German, it is derived from the Germanic word id meaning ‘labor, work.’

Indy – It has American origins and means ‘independent’ or ‘Indian.’

Isla – Traditionally of Scottish usage and is derived from ‘Islay’ which is the name of an island off the west coast of Scotland. Isla means ‘dynamic, vibrant, brilliant, bright as sun.’

Jackie – Its origins are in French and Hebrew. It means ‘may God protect’ or ‘supplanter.’

Jalen – Traditionally a boy’s name with its origin in Greek meaning ‘healer, tranquil.’

Jasmine – A name of Persian origin meaning ‘gift from God.’

Josie – This is a cute short form of the name Josephine. A French name meaning ‘God will increase.’

Kara – This alternative spelling is from the Cornish word meaning love.

Katie – This originated as a pet name for the name Katherine or Kathleen. The name was associated with the Greek ‘katharos’ which means ‘pure’.

Kayla – This name is of Arabic and Hebrew origin and means ‘laurel, crown’.

Keira – It is an Anglicized version of Ciara and means ‘little dark one’.

Lauren – Derived from the French name Laurence, its meaning may be ‘laurel tree’, ‘sweet of honor’ or ‘wisdom.’

Lea – Is a variant of Leah from Hebrew and Lee from Old English. The meaning is ‘delicate, weary, meadow, or pasture.’

Lily – Directly derived from the flower of the same name, whose meaning is ‘pure’, ‘passion’, and ‘rebirth.’

Lola – It is a short form of the Spanish name Dolores, which means ‘sorrows.’ 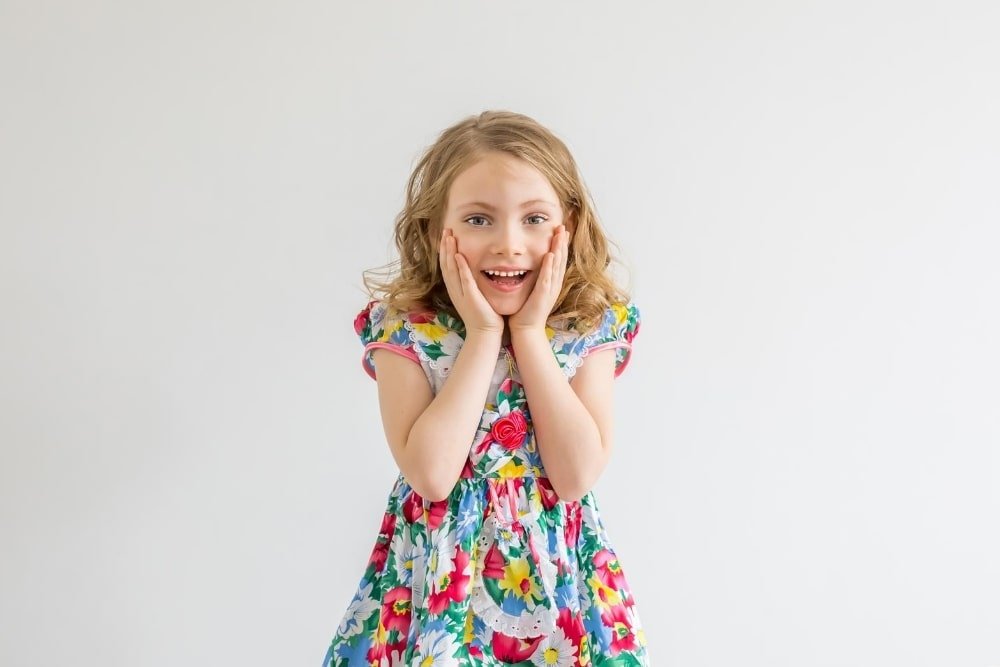 Mary – Its origins lie in Hebrew, Greek, and Latin. The meaning being ‘bitter’, ‘beloved’, ‘rebelliousness’, and ‘wished-for child.’

Maya – English origin and its meaning is ‘good mother’, ‘illusion’, and ‘water.’

Megan – Is a Welsh given name, which is a short form of Margaret. Margaret is of Greek origin and means ‘pearl.’

Mia – This originated as a form of various unrelated names. It means ‘my’, ‘mine’, or ‘bitter.’

Molly – This is of Irish origin and is a pet form of the name Mary meaning ‘star of the sea.’

Nicole – This is a female version of the name Nicolas, which is of Greek origin and means ‘victory’, and ‘people.’

Nova – Derived from the Latin ‘novus’ or ‘new’ and was first used as a name in the USA in the 19th century.

Olive – The name is of English origin meaning ‘olive tree.’

Orchid – It comes from the Greek ‘orkhis’ which means ‘testicle.’

Opal – Derived from the gemstone opal and means ‘jewel.’

Quinley – Derived from the Irish O Cuinn and means ‘wisdom’ or ‘chief.’

Reagan – With its origin in Irish, meaning ‘little king.’

Riley – This name first appeared as Raghallach which originated from a man who died in the Battle of Clontarf. It means ‘valiant.’

Ruby – Taken from the name fo the gemstone and means ‘red.’ 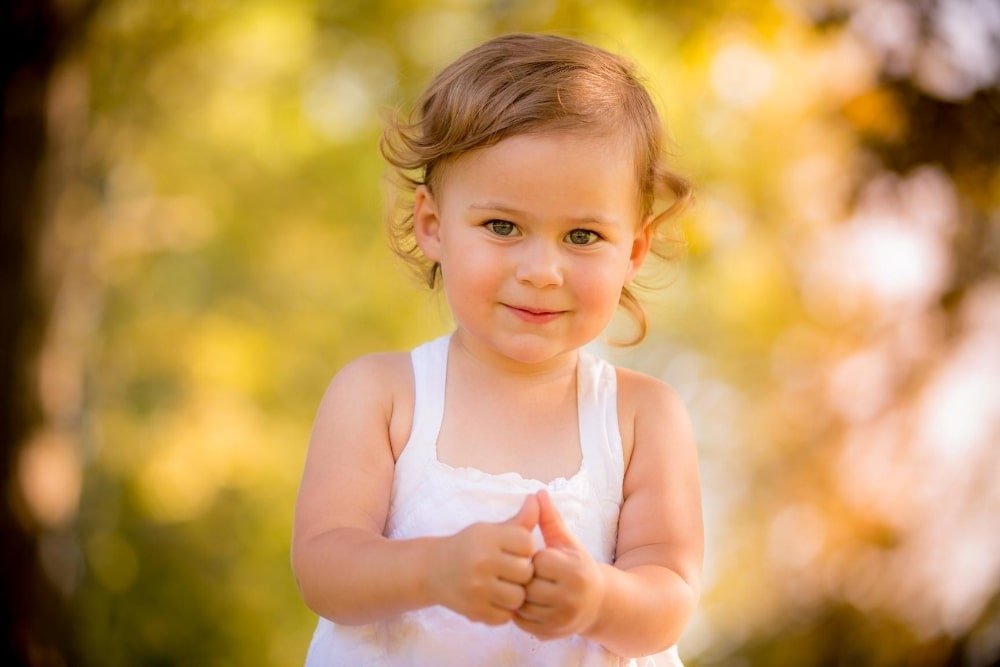 Sarah – Its origin is in Hebrew and means ‘Princess.’

Scarlett – Of English origin and symbolizes courage, passion, and force.

Taryn – English, and Welsh in origin and means ‘from a high rocky cliff.’

Tara – It has multiple meanings in different cultures. It is a word originating from Sanskrit and means ‘star’ and it symbolizes the light of the soul.

Taylor  – It originated as a Norman occupational surname meaning tailor.

Tessa – Is of English origin and means ‘harvester.’

Una – Is from the Irish word uan which means lamb. The name might mean ‘the personification of truth, beauty, and unity.’

Veda – Its origin is of Sanskrit meaning ‘knowledge or wisdom.’

Valor – Of Latin origin and means ‘worthiness and bravery.’

Willow – Derived from Middle English and taken from the tree of the same name meaning ‘gracefully slender and lithe.’

Winnie – Is of Welsh origin and means ‘fair one’. 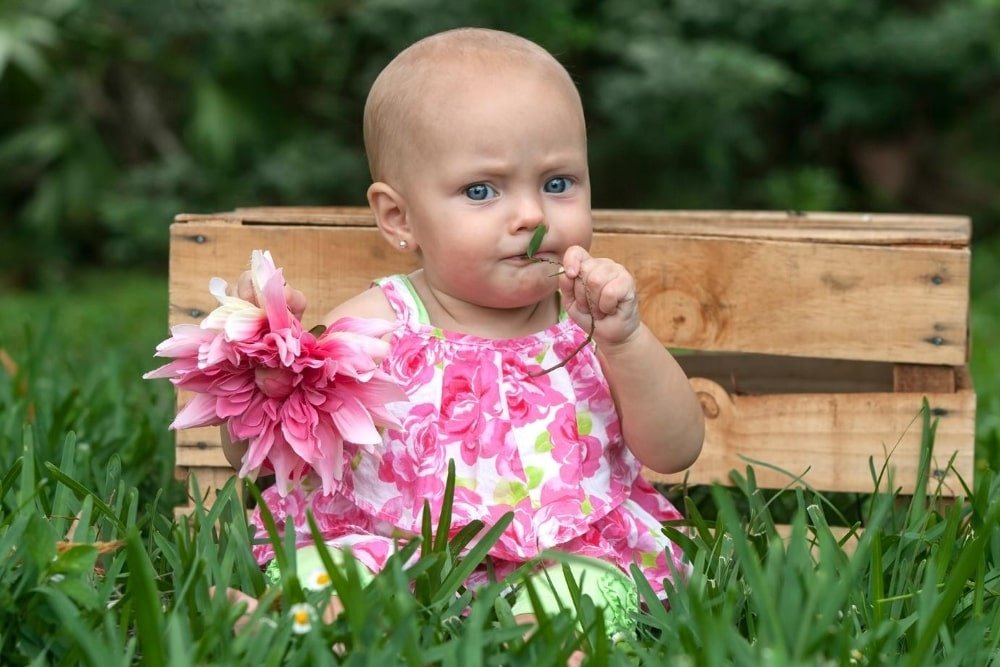 Ygritte – This name was invented for the Game of Thrones series and means ‘eye-catching.’

Zina – Is of Greek origin and means ‘shining’ or ‘going back.’

Zoey – It is of Greek origin and means ‘life.’

There are so many fantastic two-syllable names available for girls that you will be spoilt for choice. Our list could have easily gone on for at least another 100 names. But I think that you have enough to be getting along with.

As with choosing any name, it’s important that you do your homework and find out the meaning of the name you intend to use. As seen above, the last thing you want to do is name your beautiful baby girl something that means ‘testicle’!

Hi, I'm Emma and I'm a mother to 5 beautiful children aged from 1 to 21 years old- life is hectic! I have learned so much along the way, not only from my own children but also through my professional life. In my positions as a Childminder and Teaching Assistant, I have studied Child Development and The Early Years Developing Practice. I wish to share all of this knowledge and help you with your own parenting journey!
PrevPreviousWhere Is Barley In The Grocery Store? Aisles And Locations
Next13 Best Nintendo Switch Games for 6, 7, and 8 Year OldsNext